Writing a song: Part 1: The Beginning

February 18, 2012
I've produced a few records from my home studio, most recently finishing "Mind The Gap" at the end of 2010. Pretty much everything has been covers, but I've intended to do an all-original record with a mental health theme. Problem is, I'm not much of a songwriter. Not much at all, really.

Now I'm working on something original, and I figured I'd share the process as I go through it.

It's a song tentatively titled "I Don't Want To Go Outside Any More" -- I'm going to abbreviate it Outside from now on, simply because the full title is too long to type.

Back in 2007, I had an idea. A melody or something, with a few scattered lyrics. I was using Adobe Audition for recording and FruityLoops for drums back then, and on October 9, 2007 I laid down a bit of guitar so I'd be able to remember what I was cooking up. Here's how that sounded:

The idea stuck with me ever since. From time to time, I've had ideas about the lyrics and was able to imagine the whole song in my head. Unfortunately, the best ideas come as I'm trying to fall asleep. The best lyrics have slipped my mind. The middle part with the bridge has disappeared. It's been a year or so since I last tried recording anything. But last weekend, I decided to sit down and sketch out the structure of the song.

I use Reaper for recording now, so I laid out a drum loop, a piano intro, a synth bit, then used the MIDI keyboard to lay out a bass part that had most of the melody in it. By moving stuff around, I was able to assemble what amounted to a song. I was still missing almost all the lyrics, so I mumbled through it.

The trickiest part came as I was trying to figure out the guitar part. It's one thing to hear it in my head, but another to try to play it. I am not a trained musician and my musical theory knowledge is just what I learned in grade school and skimming through guitar magazines years ago. There was a part in the chord progression that just didn't work with what I was playing. I went through the major chords and a few minor chords and nothing was really working for that one spot. I don't know enough to even know what key the song is in, but the song keeps coming back to a G major chord, so I did a Google search for chords in the key of G. It had an Am instead of A, so I tried swapping the A in the song for an Am -- hey, that sounded better! And in place of the weird progression I had, I put in a D7th. It fixed the gap! Problem solved! Score one for the Google!

Here's what I ended up with:

Here's what you're hearing:


A look at the layout in Reaper: 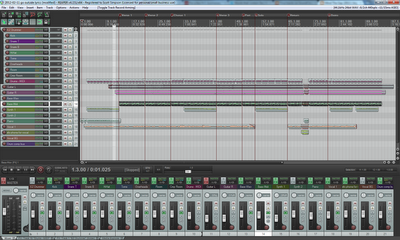 So, where do I go from here? Some changes for the next revision:


Yes, that essentially means doing the whole thing over again, but if I'm to be honest with myself, there's absolutely nothing in this demo take that is good enough to keep. But it's a decent guide for further revisions.
Even though the end result is a bit of a mess, it feels very rewarding to get this music out of my mind and into the computer after all this time. Really nice.