Michael reminded me that I once wanted a Pac-Man tattoo. Well, kinda. I've never been gung-ho for a tattoo. It was hip around the turn of the century, along with tongue piercing and Krispy Kreme donuts.

When I was considering getting one, I considered getting something to do with Star Wars. Naw, too geeky, even for me.

Was kinda keen on the idea of a Space Invaders tattoo, with a stack of the little invader guys on my leg or something. Various inked folk told me the details would be too tiny, and it'd look like a series of squashed bugs.

Eventually thought Pac-Man would be a nice iconic image that would sum up the video game generation of which I was a part. But this guy, as seen via the link MH forwarded me from BoingBoing, went the full Big-Ass route. 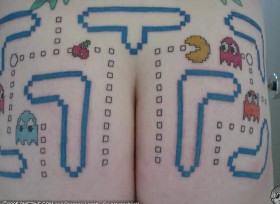