Time plays tricks on all of us. We can think "that was so long ago" at the same time as "it feels like yesterday." I run into this all the time with Amanda's death.

Yes, it feels like just yesterday, or last night, or later today, that Amanda collapsed in the kitchen and died after that long, brutal battle with ovarian cancer. But every day has ticked by at a pace like any other, and it's been a whole year of those days, with incremental and sometimes revolutionary change.

As I move about our home, it's hard to fathom that she's been gone a whole year.

Many of the decorative items she carefully arranged throughout the house are in the exact same place as the last time she touched them. She had the vision, not me, so I've been reluctant to disturb her decisions on what looks good and works.

In other places, I'm reminded that it's been at least a year since something's been in place. Like the fully-stocked baking pantry. A big jar of spelt flour in there HAS to be at least a year old, because I don't even know what it's for. I've been gradually throwing out food items, now that I'm easily reminded that they're really that old.

As much as I've tried to tidy up the house and make it mine and Gordon's, there are still oodles of things that are exactly as she left them.

Her garden gloves and trowel have been hanging from a hook just inside the back door as though she's going to go right out and plant something. Her coffee mugs are still plentiful in the cupboard. Her electric toothbrush is still in the bathroom drawer. The July 2016 calendar she made is still on the refrigerator door. There's a great big Mike's Hard Cranberry Lemonade on the top shelf of the fridge waiting for her to drink with friends. Just recently I decided to throw out a bottle of water in the fridge that still had the label on it from when hospital staff would stash them in the fridge at the nurse's station. 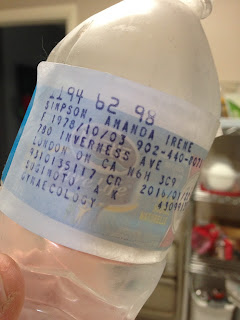 Meantime, I just sold the RAV4 she had so many adventures in, from bringing Gordon home from the hospital the first time, to traveling across the country to move from Halifax to London, responding to nerve-wracking child welfare investigations in Nova Scotia, or going on adventures with friends. The car became a liability and I've moved on to a new one.

It was a year ago that I had to go into Gordon's bedroom and tell him that mommy died. He and I have done a lot of processing and remembering since then, and I know we're not done. We may never be. Gordon and I went to a parents-and-kids grief group in the spring. I can't say it did a whole lot, but it was an anchorpoint for a lot of discussion at home. He remembers more about that night than I thought. And he has a million questions. I've tried to answer them honestly.

He's a different boy. The day after she died, we went for a haircut. I have the "before" photo and see Amanda's moppy-haired little boy. Ever since then, he's grown up a whole lot. He's so amazing that I can't even write the words to explain it. He's smart, kind, loving, curious, and all the things Amanda wanted so badly for him to be. She wanted to survive long enough to walk him to his first day of Junior Kindergarten this fall. I'll be doing that instead.

I'm never sure how much he remembers his mom from actual memories. I talk about her every day. Too much, probably. But I want to keep the memories he has alive, and curate the partial memories he has, to build a loving, real memory of his mother. Not that she's being made out to be a perfect saint. I was telling him about the reason I close the living room curtains every night -- because she told me I had to. He paused, thought, and said "Mommy was bossy sometimes." Yes, she was. That's just part of who she was.

As for me, I've been mostly okay. As you've seen here over the months, I'm committed to moving forward even when I don't know where I'm headed or whether my head's on straight. I'm at a point in my personal life where I'm mostly making it up as I go along -- and I'm ok with that. I'm feeling a clash between "older/wiser/smarter" and "I have no idea what I'm doing" -- and that's kind of fun.

I did have an unexpected grief attack yesterday. I've been continuing to declutter and tidy up, and happened upon what looks like a bag of stuff Amanda picked up from a gift shop or antique store on one of her adventures. Some of it was an easy decision to donate to Goodwill. But I found a "hopes and dreams" jar with a cork lid. And I somehow remembered it being intended for Gordon. But I couldn't remember exactly what for, or how it worked. I took it upstairs and put it on a shelf above Gordon's bed, somehow thinking that his mom wanted him to have a place to keep his hopes and dreams safe. One little sign of Amanda thinking about his future; a future she can't be here for. And then I just lost it, wailing and unable to settle for a few minutes. I don't have a lot of those moments any more, so it surprised me.

Amanda's wishes for Gordon still influence how I parent him. If she could give me a review, I'm sure it'd be full of nitpicky complaints, but she'd be proud without saying so. Gordon is going to soccer every weekend -- she wanted him in. He's been enrolled in Kindermusik. He has friends at daycare. He swims. He's close with family. He has manners. He wears decent-looking clothes. I don't have her wisdom on call any more, which is a real pain when it comes to things that were "her job" like buying him cool clothes, remembering relatives' names and birthdays, coming up with meal ideas .... but I learned a lot from her and try to use it. She's in my head and in my soul and I like to think I'm a better person for it.

I'm trying to be a good dad by living my life and attempting to be happy. I'll say that I've begun dating. After sharing my life in public in horrifying detail for so many years, I'm going to exercise my right to have a little privacy in this regard. I don't want to make dating decisions based on how it would play out on the blog. Thank you.

Gordon and I are still hoping to trek to Halifax in August, and still hoping to record some kind of video memory when there. I hope to see some people and places that bring back that feeling of love and peace, and return some of Amanda's remains to the ocean in accordance with her wishes.

Being completely honest, I still struggle with Amanda's memory every day. I'm still processing, even a year later. Obviously I loved her a lot. But even aside from the cancer struggle, things were complicated. I have conflicting feelings that have yet to reconcile into a place of calmness and peace. That's stuff for me to work on, over time. Time keeps on ticking. Time, by itself, heals nothing.

For everyone who's remembering Amanda today, thank you. So am I. We've all been through an interesting year. I can't pretend to understand your journey, and I can only offer a tiny slice of insight into mine. But I'll say that I'm optimistic and even excited for the future. She'll always be a part of me.

Thank you to all the family and friends who've been such a help so far. I still need you. I'm still that mostly-hermit guy who takes too long to say yes to plans, and is embarrassingly lousy at being the one to reach out. But I still need you. I'm functional but still not whole. Everyone's got their own lives to live, and I know I don't always make it easy to stay close, but you have to know I really appreciate all the help that Gordon and I have been given. Love you.