April 12, 2016
Sorry for the big gap between updates, but I think there's good news to report. If all goes well, Amanda could be coming home .... tomorrow!

It's been nearly three weeks, I think, since Amanda's second colostomy surgery. They did a transverse loop colostomy on the other side of her abdomen. She came out of it with a whole bunch of retention sutures bringing the wound together. It's a mess in there, that's for sure, but this one looks like a keeper.


The first few days after surgery were rough. Amanda was pretty well out of it, either in a lot of pain or so drugged up that she couldn't stay awake. There's that fine line between "relief of pain" and "you've stopped breathing."

Once she got through that, there was more pain -- the site of the stoma (new hole where the intestine is revealed) is right about where she had the chemo burn a couple of years ago. (They tried a chemotherapy technique where the chemicals are injected through a port into the abdominal cavity so it can get right at the cancer cells, but the needle came up short and shot the juice into her fatty tissue. An internal chemical burn. Yowwwww. Now it's re-triggered.)

She's also had some infection issues. She has a tunneling wound or sinus tract. It's an infection that's creating a cave inside her tissue, and those are tough to treat. It was really yucky and is still not solved.

The docs and nurses say her major surgical wounds are healing nicely, but that's all relative. At first glance, she still looks all sliced up with open wounds going here and there. Kind of a Frankenstein's belly of gaps and closures and flesh going here and there. But it's getting better.

She was on TPN (total nutrition by IV) for a good long time, but is back to eating and drinking like a human again. That, plus the fact that the new colostomy is rerouting the poop flow OUT of her body instead of into her gut, is probably making for better healing.

Things aren't perfect or ideal yet. The sticky flange that the colostomy bag sticks to has been prone to leaking -- it's not supposed to. Her wounds are still open and need frequent re-packing.

But she's determined to GET HOME and the doctors are behind her GOING HOME. Gordon wants her home. I want her home. It ain't gonna be easy, but it's time! Could happen as soon as tomorrow.

So, what have we been up to over the past few weeks?

Amanda has been filling the doors of her hospital room with pages she's finished from her adult coloring books: 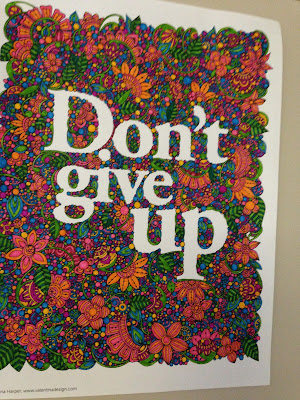 Gordon celebrated his third birthday with mommy and I in the quiet room on the gyne surgery floor, down the hall from Amanda's hospital room. Cupcakes and presents, then I took G to Adventures On Wonderland for an afternoon of play! (Thanks to everyone for all of Gordon's amazing birthday presents, by the way!)

And, with the help of my always-supportive and uber-helpful in-laws, I've been able to get out a couple of times. I got photo credentials to shoot Walk Off The Earth and Marianas Trench at Budweiser Gardens (Flickr Album):

And went with a work buddy to a wrestling show last weekend and snapped a few hundred pics (Smash Wrestling Flickr album):

After nearly three months of holding down the homestead while Amanda's been in hospital, visiting nearly every day, and keeping things rolling at work I confess -- I'm pretty worn out. I think we all are. It's been a real grind for so many people who've been working behind the scenes to keep life going. But it looks like things are taking a turn for the better.

I hope to have another update soon once Amanda's home and getting used to our house once again. I think she's going to appreciate the place a little bit more, after having spent almost a quarter of the year in bed in a small room!

You can never break the chain
There is never love without pain
A gentle hand, a secret touch on the heart

A healing hand, a secret touch on the heart