In a dark valley of infection

Tuesday afternoon. Some worry yesterday when they found poop coming out of her big incision -- I haven't heard directly from the doc but I can't fathom how that's ok. Pain and rigidity in her abdomen and pus around her stoma -- also not good.

Docs wanted a CT scan to learn more. Sounds like she had a hard time swallowing the contrast drink. She's been nauseous and pretty much out of it all day today. Looks like her IV suite includes Gravol. (Below) Lacey has been here knitting all afternoon as Amanda sleeps. Nurse says the CT report is in but nobody's heard what's in it. Pathology results from the tumor removal should also be in any day, we figure. So, no good news at this point. I'm kind of worried, actually. Doesn't look like a good day for Gordon to visit. The doc might be better off phoning me than trying to talk to her today. At least she's finally getting some sleep. She's been riding the hydromorphone button for days trying to get relief. 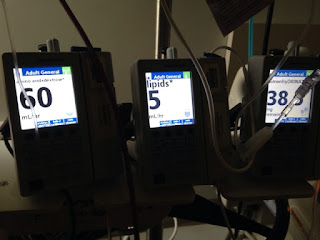 Prior to yesterday, they'd packed the outside of her surgical wound with a sponge foam and sealed with plastic along with a constant-suction vacuum designed to take the healing-juice goop away and let the body regrow the connection from the inside out. The gunk drained into this gory tank of yuck. 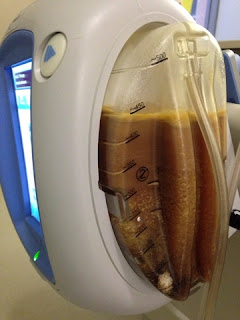 Now they worry it could end up sucking bowel out or something, so it's back to old-fashioned gauze packing and changing. Ouch.

"This is awful," says the doctor as he leads an update that Amanda takes in aurally, motionless, with a cold washcloth over her eyes. Amanda Simpson has been out cold or puking most of the day. Doc confirms she has an infection in her pelvis. Can't say how much or quite where, as the CT contrast drink didn't travel far enough to get a good image. May do new pics with contrast put in the other end. Her stomach is full of bile and undigested contrast shake from last night. May pump her stomach tomorrow if she's interested. Tube up the nose sounds like torture, but so is 24/7 nausea.

Main concern now is her mental state -- Amanda is usually....what's the nice word....vocal. For the past day she's been dark, withdrawn, even confused. We are in for a dark time of hard recovery and can't afford to have her give up. Doc says she's not at death's door -- not even in the neighbourhood. But this is not going to be a rapid comeback. Her body has some serious fighting to do and there's not much more for the docs to do to help it.

Me, I'm glad she's finally resting, but I know she's scared and in a dark place she hasn't seen for a long time. I hope once the nausea clears, we'll have a comm line back to her spirit and get her back in the fight.