With cancer treatment done, the family heads for a new normal

November 25, 2013
After her ovarian cancer was found during the c-section birth of our son Gordon in April, and after six months of chemotherapy, multiple surgeries, complications and hospitalizations, my wife Amanda is recovering. Treatment is officially over.

She's still tired and easily fatigued. The chemo has left her anemic and with with lingering joint pain. Toward the end of the treatment, she was really feeling down. She seems to be coming back to her normal self.

It's clear the chemo has left some side effects behind: neuropathy -- nerve damage in her feet, mostly; some "chemo brain" symptoms that show up as she grabs the wrong words when trying to explain something, although that could be "mommy brain"; and an unclear situation about the abscess she had after one of the surgeries.

Her hair's starting to come back! That's nice to see. 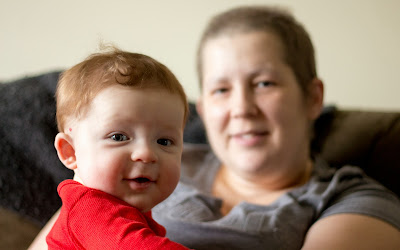 As for what happens next -- we're not exactly sure. The thing about cancer treatment is that once you're done, it's considered cured....until it comes back. Doctors don't usually use the term "cured" -- they say it's NED or No Evidence of Disease. Sometimes it's called remission. There might still be something going on, but unless there's something in blood or a scan to say so, you're NED.

With ovarian cancer, my understanding is that they don't bend over backwards looking for a return. They don't scan you frequently or check your blood. The docs say the research shows that finding and treating new tumors as soon as they arise does not make for a better outcome. In other words, patients are usually the ones to keep an eye on their own symptoms.

If the cancer comes back -- and it usually does -- then the doctors might do something about it. Intervening with more surgery and more chemo early on tends to make the patient sicker for longer and does not extend life. What it tends to do is make the cancer resistant and make the patient more susceptible to the cumulative effects of chemotherapy. So, they wait until there's something significant to treat before treating anything.

Well, that sucks, doesn't it? How do you go forward living a full, happy life while knowing that something deadly might be making a comeback inside you?

We don't know yet. I guess we'll find out. I wish it were as simple as saying "Well, I'm glad *that's* over with! Whew!"

We've learned a ton about cancer in the past eight months. What it is, how it spreads, how it's treated, and how frighteningly awful it is. We have not learned about cancer survivorship. We don't know how to live normally now. What's normal? How normal is the new normal?

The transition in our household is a more practical one now. From the beginning of this journey, we've had an enormous amount of help under our own roof. Amanda's mother and stepfather have stayed with us. Barb and Wendall took care of Gordon so we could sleep. They did laundry and cooked meals and mowed the lawn and did groceries and fixed things around the house. They made an unbearable situation less unbearable. But now it's time for them to get their own lives back.

Wendall returned home to Ontario a little over a week ago. It was hard for him, since he'd obviously become very close with Gordon -- "little dude" as he calls him.

Barb heads home on Friday. Gordon loves his Nana. I'm sure we'll feel lost without her around for a while. She knows all the little tricks to get him to sleep or make him giggle. She's been a mom for 35 years. We're still rookies.

But it's time for us to learn how to be 'normal' parents. We've been working in the past few weeks to assume most of the care of our boy. Yeah, I've had poop on my hands too many times. We're getting less sleep. But this is what parents do, right? Okay, most moms don't have a hard time getting out of bed because their nerves have been damaged badly enough that standing up is a pain. But that's *our* normal.

This transition from cancer-patient-and-caregivers to survivor-spouse-and-baby might be the biggest functional shift in the house since Gordon was born. It's going to be difficult but we're going to do it.

And, hey, about Gordon. He's almost eight months old now. He has two little teeth and two more coming in up top. He's very tall. He's eating all kinds of different foods now, and likes almost all of them. Almost. Here he is trying beef for the first time, after a major failure trying chicken just days earlier.

I know this blog ends up being read by people outside our immediate family. Do any survivors in similar circumstances have wisdom to share on getting on to the next stage of living? I'm sure we'll tap into some professional resources for this stuff, but I'd love to see a few pearls here.