July 08, 2013
It's been a rough few weeks. We met with Amanda's gyne-oncologist for a serious sit-down about the future. We pressed for information about the remaining course of treatment, how likely her ovarian cancer is to return, and a prognosis for future survival.

The often-quoted statistic for surviving newly-diagnosed ovarian cancer is 20% at five years. That means that out of every five women diagnosed, all but one of them will be dead five years out. Her doctors suggest a more accurate current stat is about 24%. Still not encouraging.

We've been holding on to hope that her mitigating health factors would raise the likelihood of survival. After all, her tumours were discovered during childbirth before they caused symptoms, in contrast to most patients whose cancers are found only after they were big enough to be noticed. Amanda's relatively young -- in her mid-thirties -- and in otherwise decent health. She should be able to endure aggressive chemotherapy. The cancer was staged at 3C, indicating it had spread beyond the ovaries and into other parts of the peritoneal space. But most of it -- in the omentum -- was taken out at the time, and the rest seemed limited to a couple of small-ish tumours around her uterus. Surely, we thought, the odds were in our favour?

Three years, we're told. Most people with this kind of ovarian cancer survive three more years after treatment. This cancer usually comes back. It usually kills women by causing multiple bowel obstructions. So, three years is what we're told to expect. Actually, four, since Amanda's going to be given an aggressive and still somewhat experimental kind of chemotherapy that involves pouring warmed poisons right into her peritoneal cavity and sloshing it around in hopes of bathing any remaining cancer cells in full-contact chemicals, rather than just sending it through the bloodstream. With that, maybe four years.

Live your life accordingly. If you have things you want to do, do them now.

This is probably going to mean significant changes to how we plan the next few years. 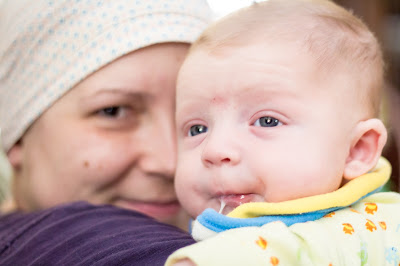 Now, it's not like the doctors have given up or anything. The goal has not changed: Destroy the cancer entirely and hope it's never seen again. But all it takes is a few rogue cells to hide away and regroup. This stuff is known for making a comeback in a fatal way.

So, friends, if you've noticed us being a little glum, defeated, sad or edgy lately, that's why. We love our life in Halifax and had imagined life after treatment as being a bit tense but full of potential. Now it feels like we have to seriously consider end-of-life or last-few-years planning right now. Not now-now, but soon-now. Sooner than we want.

Sigh. I'm so mad at cancer right now. I wish we could just raise our child and deal with petty annoyances and everyday troubles. Our boy is three months old and if the doctors' stats turn out to match our outcome, he may have a limited memory of his mother. And I can hardly imagine what my life would be like. I can't remember any more why I was so hopeful, because this news is so heavy.

My hope is that the treatment works. I hope it kills the cancer forever. Even if it does, our life will probably end up being lived differently than we'd hoped in the next few years.

Amanda goes in for surgery on Thursday. She's having a radical hysterectomy -- uterus, ovaries, tubes, cervix. They'll also handle her guts quite thoroughly, pulling her intestines out, checking for any tiny tumours. They'll take out the rest of her omentum. It's a big deal. She won't be able to lift the baby for something like six weeks. She'll be in the hospital for about a week, I think.

Not long afterward, though, it's in for the intraperitoneal (IP) chemotherapy. That's the intense, nasty kind. She's already been experiencing some neuropathy. That's nerve damage in the extremities that we hope is temporary, but might be permanent. Side effects like those are said to be much worse with IP chemo.

I was delighted to have Emilie Chiasson from Ovarian Cancer Canada on my talk show, Maritime Morning Weekend Edition. We had Emilie on for a full half hour on Saturday and covered a lot of ground. If you're new to learning about ovarian cancer, please have a listen as we give a crash course.

The interview begins about half-way through: