We went into the IWK on Tuesday, April 2nd for a Cesarean section prompted by an ultrasound earlier in the pregnancy that showed the placenta dangerously close to the cervix. Too close and she could bleed to death during delivery. An ultrasound closer to the due date showed the placenta in a slightly safer place, but now blood vessels were blocking the way out. An emergency C-section was in order. 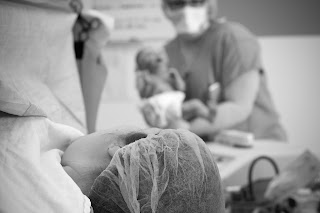 So we went in, three weeks early. The delivery went smoothly. Our baby Gordon was frank breech, pulled out buttocks-first. I went over and cut the cord. I brought our first child back to Amanda to let her see. It was better than I'd expected!

Then the surgeon started talking about finding bumps. Instead of stitching her up, the team was finding trouble inside her.

They had to page the oncologist. I went into shock, sweating and heaving on the operating room floor. Nurses wheeled me out, crying, as doctors talked about knocking my distressed wife out and removing organs.

An oncologist arrived from the nearby VG hospital. She found Amanda's omentum caked with cancerous tumours. Amanda begged them not to put her under as they removed most of that organ and explored for more malignancies. She wanted them to take out what they had to take out, but she wanted to be with our son in his first minutes of life.

Our boy was perfect. The moment was not. As nurses watched over her recovery in the hours that followed, we did our best to sit calmly with the mysterious discovery.

Bonding with the baby was interrupted by visits to mammography and CT scans. The tests found nothing, which was not good news. The doctors needed to know where all this cancer began. Otherwise they had no way to treat it.

The nurses and other staff at Halifax's IWK Health Centre were gracious and helpful and accommodating beyond belief. They were wonderful throughout our stay.

A phone call days after our arrival home told us the rush-ordered pathology revealed an "ovarian type" cancer at stage III-C on a scale to four. Amanda was unable to talk, wailing and dry-heaving on the floor as I finished the call with the doctor.

A week ago, we were expecting a new baby. Now we await months of sickness and hair loss, followed by a vibrant 34-year-old woman being sent into surgically-induced menopause. Then more sickness.

They tell us that even if this treatment knocks the cancer out, it could return one day, and if so, we would only find out when new tumours are large enough to make themselves discovered.

This cancer was really only found because Gordon was delivered three weeks early. That happened because doctors found the blood vessels in the way. The final ultrasound would not have happened if the previous one hadn't shown the placenta in a dangerous spot. And none of it would've happened if we hadn't tried for a family. 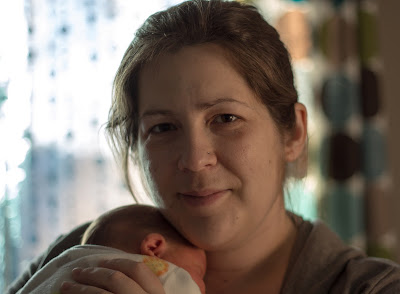 It looks like Gordon will be an only child, and his parents are already off to a difficult start. But without him, Amanda's cancer would have gone undetected for much longer.

I want to thank so many people, but I won't even try to list them all here in case I forget anyone. We've had nothing but positive vibes from all of our friends, family and colleagues. Thank you.

I look forward to getting back to work and continuing to grow Maritime Morning Weekend Edition alongside the new producer. News95.7 continues to grow and just won another pile of industry awards.

Most of all, I look forward to making the most of my time with Amanda and little Gordon. Being a dad is more fun than I even expected. I expected it to be terrifying, but not for the reason it is now.

Thanks to everyone who saw this via Twitter or Facebook or Google+ and came to read. Thanks also to the dozens of people I've connected with through the years through social media -- and so many who I've never exchanged a word with -- who've offered their kind thoughts and even offered help. Thank you!

I know how helpful it can be to find other people who are going through the same thing as you. I know search engines can help find those people.

So, just for the record and so Googles and Bings can help people find this story and any chapters hereafter, I'll make official note that we're talking about a Grade 1-2 serous cancer, ovarian type, Mullerian origin, stage 3C. Planned treatment is three courses of IV Carboplatin and Taxal, then total hysterectomy and oophorectomy, then three more round of chemo, perhaps intraperitoneal.

As Amanda said, we're not going to fight this in the dark. Thanks for lending your lights. She's now interested in starting a blog, and I'll see what I can do to get that happening.