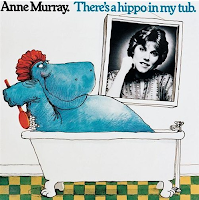 I've been a Family Guy fan from the beginning and I think Anne Murray's "There's A Hippo In My Tub" was the first record album my parents every bought me.

So, imagine my delight when I heard that Anne Murray was going to star as Anne Murray on Family Guy! I was working on ideas for this weekend's editions of Maritime Morning on News95.7 and decided to take a shot at booking someone to talk about it.

I called the Anne Murray Centre in Springhill, NS and made my pitch. They asked if I wanted to talk to Anne or someone from the Centre. It hadn't even occurred to me that I could talk to Anne Murray. They said they could try. They called back soon afterward with Anne's phone number. Go figure!

Here's how it went on Saturday morning at 10am. Enjoy!

ANNE MURRAY on being Anne Murray for an episode of Family Guy.

And here's a clip of Stewie deciding to try to make Brian an Anne Murray fan: