September 17, 2012
** UPDATE Jan 24/2012: It's been brought to my attention that someone has been running Kijiji ads pointing to this page in what may be some kind of third-party smear campaign against Daniel and JD Hawkeye. Let me state this clearly: I have had no dealings with JD Hawkeye regarding firewood. My complaints are spelled out very clearly and very specifically here, and I have no part in any shenanigans involving warning ads on Kijiji. I'm a proud Kijiji user and I know that the rules clearly specify that warning ads are *not* allowed. If I see any ads on Kijiji citing any of my blog posts, I will take action to have the posts removed and the posters barred from the site. My complaints are my own and bigasssuperstar.com is the venue where I've chosen to express them. (Plus one post on Gripevine, a start-up run by a popular Halifax musician.) Whoever's involving me in his personal pissing contest -- stop it.

Following up on the recent post about Daniel from JD Hawkeye Tree Cutting no-showing a series of appointments and refusing to honour a paid-for deal, I'm learning more about this company's history.

The company was contracted to cut two trees on July 23, 2011. They did not finish the job. My yard is a mess. They dropped one of the trees in the wrong direction. It struck my neighbor’s deck causing damage. I have made many calls requesting the owner to come and finish the job. He has made all kinds of promises but has not delivered.
Signed,
A very dissatisfied and frustrated customer.
Lower Sackville, Nova Scotia

Watch out, though -- Daniel is selling himself as more than just a tree-cutter with 20 years' experience. (Or 18, or 22, depending on which ad you're reading.) Oh, look! A new ad saying he as 25 years of experience.

He also lists himself as a 'Certified Arborist', even though the International Society of Arboriculture does not list him.

He's advertised himself on Kijiji as a painter, offering "FREE ESTIMAYES"; firewood "WERE BASED IN SACKVILLE"; selling a large property in the Oldham/Enfield area; "100% CUSTOMER SATISFACTION,VERY PROFESSIONAL AND EFFICIENT." 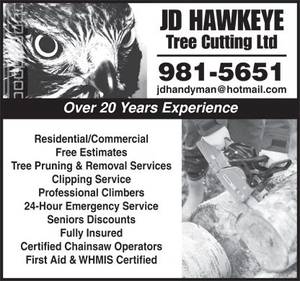 One mark of a dodgy company is that it keeps changing phone numbers.

So, if he's growing an increasingly bad reputation, no-showing calls, refusing to do work that's already paid for, and now selling off property and his truck -- is it likely that I'm going to get Daniel to refund my money? How about Dealfind?

I sent a refund request to Dealfind last week and have yet to hear back. I'll keep you up to date.

Again, if you have a review of JD Hawkeye, please leave it on one of the posts here.

Now, in searching further, I've found a Nova Scotia government document from the Department of Justice:

NOTICE is hereby given pursuant to Section 16 of the
Partnerships and Business Names Registration Act ("the
Act"), that the following Partnerships have made default
in payment of the annual registration fee due September
30, 2011 and the Certificates of Registration issued to
each of them under the Act are hereby revoked by the
Registrar of Joint Stock Companies as of November 4,
2011.

Yup, JD Hawkeye defaulted on payment to the government, and the Justice Department notes it.

This isn't looking good for Daniel, who's shown me nothing to prove that he's a Certified Arborist or even a properly-registered business.