What the BEEP is this juice? Not juice. 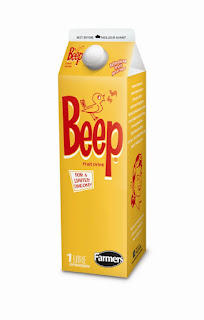 Two years ago, Farmers Dairy decided to pull the plug on its formerly-popular juice-flavoured beverage "BEEP". It had been a staple at breakfast tables for half a century, but had lost its nostalgic lustre.

People bought the stuff up as fast as they could when word got out in 2010 that Farmers Beep would no longer be produced. Web sites sprang up. YouTube videos were produced.

The "End of Beep" story became the most-read story of all time at News957.com.

So, when I saw word on Twitter today that Farmers was bringing Beep back for a limited time, I knew we had to get on top of this. I called Farmers Dairy as soon as I could and tried to get an interview. Unfortunately, their communications person was out of town on training.

But she called me back anyway and I pushed her to speak with me. What I got was the following interview:

Now, I'm a bit on the outside here. Beep was not strictly a Nova Scotian thing, but this seems to have been the last stand for the drink. What's in it? The ingredients for BEEP drink are: water, sugar, concentrated orange juice, concentrated apple juice, apricot puree, citric acid, prune syrup, orange pulp, modified corn starch, canola oil, flavour, sodium citrate, colour, sodium benzoate and ascorbic acid.

Beep will be sold in retro packaging in 1L and 500mL sizes from mid-June to October. It has a shelf life just over one month, so fans will be able to enjoy it unspoiled until a little before Christmas.

By then, I'm sure Farmers will have shifted to egg nog production and the nostalgia file will close.

Unless.... Unless there's a consumer uprising that brings this syrupy drink -- described by some on Twitter as Sunny Delight with a hint of asbestos and cocaine -- back to the mainstream for good.