June 23, 2012
I've been a fan. I've been into bands, for example. Bought all their records. Went to their concerts. Learned to play their songs. Collected bootleg recordings. Read the biographies. Kept up on news. Heck, I even made a web site about one of the bands and kept it going for more than a decade after the band broke up. (See www.cubisaband.com for that.) 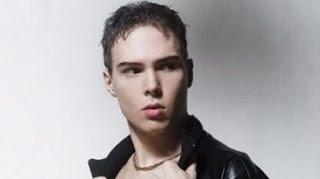 But I've never been obsessed about anything in popular culture. Sure, if you go back into the archives here, you might say I had an unhealthy degree of interest in learning about Scientology and why it was so bad. Sure, I'd lay awake at night imagining conversations with Scientologists and how I could get into their heads and wake them up to reality. But I don't think any of that would even begin to cross over into the realm of clinical obsession. I just get really interested in stuff for a while.

Such is not necessarily the case with some people, and some of the things they obsess over would make fine fodder for Dr. Phil or a show on TLC, not to mention a professional psychologist.

One such situation was explored Friday as I filled in as host of The Rick Howe Show on News95.7.

Producer Jenn spotted an article in The National Post about the growing fandom surrounding accused murderer Luka Magnotta. He's the guy charged with having murdered a Chinese student on video, then doing nasty things to the body. Jun Lin's remains were cut up and pieces sent to political offices and schools.

Magnotta fled to Europe, where he was arrested. He's since been returned to Canada. He's before the courts now on serious charges including murder. He's waived a psychiatric assessment.

One thing that makes Magnotta obviously different from some other high-profile Canadian criminals is his appearance -- he's pretty. He wasn't shy. He was unabashedly fame-seeking. Magnotta's life played out on the internet as he displayed himself as a model, escort and actor in sex videos.


He's everything pig-farming serial killer Robert Pickton wasn't. Hairless, not hairy. Skinny, not droopy. Public, not private. Urban, not rural. Gay, not straight. Allegedly killed a man, not a bunch of women. And he has lots and lots of pictures and video.

So, should any of us be surprised that he's attracted fans?

Jenn set up an interview with Josh Visser, author of the Post article headlined Fans, defenders line up to support ‘inspirational’ Luka Rocco Magnotta on Facebook. She also pointed me to a blog at http://lukamagnottaobsession.wordpress.com.

A conversation with journalist Visser would have been interesting enough, but I thought it would be even better to speak with one of the fans. I don't know how to use Facebook, but my 'net sleuthing skills are sharp. Still, I don't know how to sniff someone out from a Wordpress subdomain.

The best I could do was to leave a comment on the 'about' page and hope the author would get back to me.

She writes as Lexa Mancini -- note the morphological similarity to the name Luka Magnotta.

I looked at her blog, and was struck by the quality and self-awareness of the writing. Lexa uses big, smart words and uses them correctly. That's something you don't always see on blogs, even good ones. If she was nuts, she was the smart kind of nuts. I apologize if this sounds insensitive, but I rather enjoy conversation with smart crazy people in limited doses. I'm no stranger to mental illness, and as long as no one is in danger or particular discomfort and people are being offered the best help available, I'm not especially disturbed by the disturbed.

Lexa wrote back and we scheduled a time for the interview. Here's how it sounded.

After the interview, Lexa wrote about it on her blog.

Now, some listeners may wonder why I didn't conduct the interview the way some on Twitter were taking on the subject. You may have expected me to spend five minutes saying "What, are you crazy?" and "This is nuts" and "How crazy are you, exactly?"

That, my friends, would not have been good radio, and I wouldn't have liked myself very much afterward. Those kinds of questions may be fair for to ask of a teenager who tackles an old lady and steals her purse so she can buy scalped tickets to a One Direction or Justin Bieber concert. This, in my view, is not the same kind of scenario.

On a basic fandom level, is someone who's a little too interested or a little too attracted to Luka Magnotta really so strange?

My wife, for example, thinks Dexter -- the TV serial killer, not the Premier of Nova Scotia -- is hot. That's fine. He's a good-looking guy, charming and crafty.

Luka is attractive in a desperate twink sort of way. A generation of young women who grew up in the era where the metrosexual was the idealized image of masculinity would no doubt be drawn to this man who took great care to craft his hair, eyebrows and fashion.

So, aside from the horrific and shocking (alleged) crimes involved, there's plenty of reasons for chicks to be all over this guy.

Don't forget that we're still in a society which seems to honour fame above all. Many people would rather be famous than rich. They'd want to be famous for anything, whether it's for finally revealing the Higgs boson or for setting fire to a police car during a riot. Frankly, I think most kids would take the latter.

Luka Magnotta, for all his...y'know, bad stuff...is a guy who's won at the fame game. If the sole goal was to do what he wanted and get famous for it, the guy has hit the jackpot.

And if I'm scoring the game for sheer audacity and curiosity -- call it the WTF Factor if you want -- he's won as well. I have to handle stories all the time. It's actually refreshing to have one come along that makes me say "he did WHAT? Jee-zus, that's crazy." Hell, I've seen a lot of crazy stuff. Some of it still haunts me. Whoever's going to cover this case when it goes to trial is going to need therapy.

Speaking of therapy -- let's get back to Lexa and fans of her ilk. Are they screwed up? Probably. But lots of people are screwed up.

She seems to want to get into buddy's head and find out what makes him tick. Well, so would I. I just don't want to kiss him.

Please don't misunderstand me: I don't condone or endorse anything Luka Magnotta has done. I find his internet conduct distasteful, I think his trail of bad debts shows poor discipline, and the whole murder thing was really bad, plus the sending of body parts in the mail (most of this is alleged, CYA)... he does not seem like a good guy.

But if we've learned anything from the movies, we know that an attractive, clever, witty villain is so much more interesting to watch than a straight-out bad guy. Screenwriters usually give the best lines to the villains, because we already love the good guy. It's more interesting if we can like the bad guy a little.

My message to Lexa -- stick with this obsession for now and see where it goes. I'm troubled by how much you say it's distracting you from other things in your life. If you can carry on with your normal commitments and keep your healthy social connections, why not see where it goes? You seem to have a solid sense of self-awareness, and the fact that even you are disturbed by how much you dig Magnotta is a good sign.

I think you might learn a few things about yourself, and if you maintain tethered to reality throughout, you could come out on the other side a more complete person. You could teach a few things to the girls who are fawning over him in ways that even you find unsettling. And if you keep blogging about it, maybe we can all get a clearer picture of what draws people to the kinds of folks who repel everyone else.