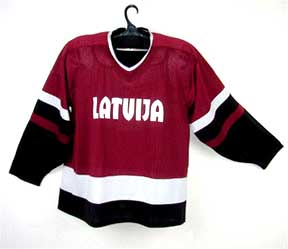 The IIHF World Hockey Championship is taking place here in Halifax this week.

In fact, it's happening just outside our windows.

BUT THESE GODDAMN LATVIAN HOCKEY FANS ARE LOUD!

I mean, it's almost 11pm and they're outside -- literally right outside our window, even though we're about 80 feet up in the air -- banging drums and blowing horns in a rhythmic and joyous fashion.

This morning, radio station Q104 set up shop on the corner to run a contest and give away tickets. Brilliant! But at 7am, I'm trying to sleep! I was ready to blame it on the hockey fans.

And y'know what? Y'know what? When the IIHF tournament is over, and these wonderful folks from around the world go home after spending their hard-earned money in our glorious city, it'll almost be time for the Royal Nova Scotia International Tattoo!

What's that mean? Bagpipes! Drums! Drums and bagpipes! And brass bands! Outside our window at 7am! Noise that could wake the dead -- only, surprise, you're still alive!

I love this city. I love culture.

But anyone who knows me knows, I've never been a fan of hockey.

You guys who beat me up in school -- you know who I'm talking about.

Thank goodness I have a box of earplugs. Something tells me that if the walls and windows don't cut the noise -- oh, there they go again with the ... oh, it's the na na hey hey goodbye song with ole ole shouts in Latvian -- the earplugs won't do much.

Oh, Lloyd Robertson ... please take me off to dreamland with the news.