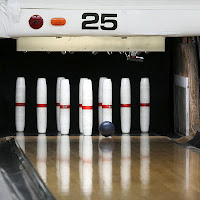 One of my coworkers has a cute kid. One of those smart kids who cracks up even cynical jerk adults like me, y'know? Kid turned five last week. So coworker suggested we all go out bowling with him. A bunch of grownups hanging out at a five-year-old's birthday party on a Saturday night? Yeah, dawg! So, me 'n 'manda and most of the newsroom headed out to The Village on Bayers Road to the Bowlarama. But this was not like any bowling alley I'd ever seen.

Awkwardone's Tribute to Candlepin Bowling sums it up:

The game is played on the same lanes as regular "tenpin" bowling, but fundamental differences separate the two variations. First of all, you get three balls per frame, rather than two. Second, the balls fit in the palm of your hand and only weigh up to two pounds, seven ounces. The pins are almost 16 inches tall and are shaped like cylinders. Third, and most interesting, pins knocked down that remain on the lane are in play as "wood". This often makes for easier - and sometimes more frustrating - shots.

It's a lot tougher to play than ten-pin. It felt a little little like the baseball vs. milk bottle game at the CNE, in that the pins don't bounce around the way you wish they would. The only way I could score consistently was to whip the ball down the gutter and let it ricochet back into the pins, taking out perhaps one pin -- and now that I read more about the rules, I find that's not even allowed.

Outscored by a five-year-old. Kids these days.