Donair or do not: there is no try 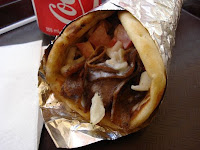 There's a corner half a block up the road from this cafe where I've been blogging where three of the four corners are donair/pizza places. What's a donair? Kinda like a gyro, I guess. But I've never had gyros.

It's thinly sliced strips of meat shaved from a big rotating lump that's kept hot in front of burners. The meat shavings are fried up and put on a heated pita that's about half the size necessary to wrap the meat shavings. Diced tomatoes and onions are added, under a mess of some kind of sauce. It's wrapped in aluminum foil and served up in a perfect state to fall onto your lap.

I was scared to try donairs because nobody would tell me what's in the hunk of meat that rotates all day. Most common answer: "kinda like what's in hot dogs -- you don't wanna know."

Okay, now I almost don't wanna know, because it might spoil the enjoyment of eating them. I had one last night and I'm still burping it today.

Just as Tim Horton's and Pizza Pizza seem to be on every block in Toronto, donair places are on about every block here. Pizza slices also abound.

Now, I'm downtown. New apartment is downtown. That's great. But I hadn't considered that it's also downtown, facing downtown, in the city that boasts the most bars and pubs per capita, anywhere in Canada. Hell, we're a block or two away from a place called the Liquor Dome. Lots of hooting and whatnot during the early hours this morning. Outside my building, that is. I was inside. On an air mattress. Without a TV. Or a phone -- Aliant was supposed to have my line working by Thursday evening. As of last check, there's still no service. In fact, I should scoot home soon so I can check for a dial tone. If there isn't one, I'm in big dookie, 'cuz my dad's supposed to be driving into town tomorrow afternoon with my TV. No phone = no intercom = no tv = dad can't find me. Crrrap. No Blackberry yet either. This is the most un-connected I've been in a looong time. I'd consider it peaceful if not for the fact that I don't even have a couch yet to veg out on.

Anyway, pictures of the new place are over in the BigAssSuperGallery... not so you can case the joint to rob it later, but mostly so my lady can get some decorating ideas before arriving.

Rock over London, rock on Chicago! Delta Airlines - we love to fly and it shows!